Oil press machine is to separate the oil from oil bearing materials by the pressing power which comes from the change of chamber volume, drive from screw worm, resistance of curve teeth at press rings and extrusion friction between oil materials. Under the big pressure created in press chamber, the oil can be discharged from gap of press bars and oil trough of press rings. Either big scale and small scale of oil press machine, they have similar theories in screw expeller pressing. Because the screw type oil press machine is mainly used by extrusion theory, so it is also called as oil extruder or oil extrusion process. 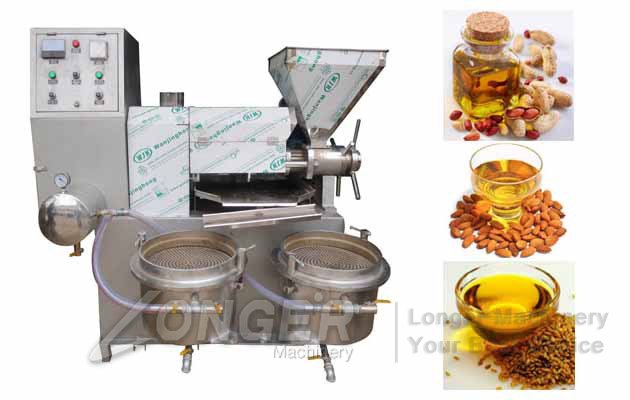 Advantage of machine:
1.All working processes are controlled by the controlling panel
2.If one drum is full it would change to use the other and automatically put the oil out of the drum.
3.Before pressing, some parts of the oil press machine such as the press chamber, press screw and press ring will be pre-heated.
4.During pressing, the press can filter the oil in due time. One operator is enough to get quality oil.
5.Oil yield is higher than common oil press.
6.Easy to operate and maintain.