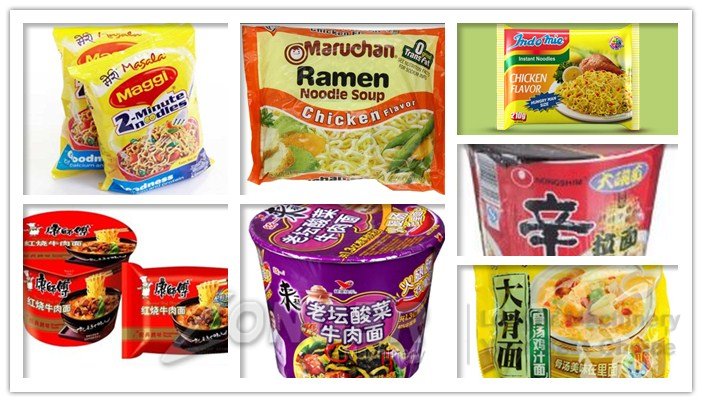 Indonesia: Indomie
United States: Ramen
Cooking Methods of Instant Noodles:
In addition to instant noodles can be eaten, but in some areas it was also a way to cook instant noodles to eat, such as a general way to cook the noodles cook instant noodles. Kinmen Taiwan and other regions popular kind of fried instant noodles, instant noodles, boiled is to later, and then the next Guo Chao, along with leaves or eat pork.
While the noodles are designed to be eaten after brewing, but some people do not eat by making it directly in Taiwan, some brands of instant noodles, for example, "the prince", "science side", produced in Thailand, "Mummy face", etc., it is the most direct crushing mixed seasoning powder (or re-shake) eaten as a snack. It is said that this way of eating is likely to be pupils invention.
In Taiwan, lo vendors sometimes with noodles as one of the materials.
In Hong Kong, the cafe can eat "fishing D" is the way to eat instant noodles to noodles to eat spiced diced placed on the surface of the mix; also fried instant noodles, and put the cooked noodles in a Pack different way of eating cheese for other ingredients. <B in Macau, the Portuguese Wing Cafe to eat a small taste of the former, such as turmeric pork, duck breast smoke, salty cattle profits and so on.
In Korea, there are also the use of instant noodles pot forces as an ingredient.

The Production of Instant Noodles:
Now commercially available instant noodles, the vast majority are in the factory to mass production machine, barely see the handmade noodles. Because most of the factory production of packaging, packaging to distinguish people mostly instant noodles: bowl is made from polystyrene (commonly known as Port: styrofoam; commonly known as Taiwan: Styrofoam) bowl or bowl package of instant noodles, cup noodles are cups packaging, another is common in plastic or paper packaging, place yourself when you want to eat a bowl of hot water to brew. On the noodle type, since the first appeared in the Japanese market, so early is more instant noodles Japanese noodles, then gradually have different udon noodles and the like.
Thank you for visiting our site! Please feel free to submit this form with any questions or comments. We will answer your message within 24 hours.
Scroll