Spaghetti Line is basically consisted of raw material mixer,extruder and molding machine,cooling and cutting machine,cooling bed and drying bed.
Production Process of Spaghetti : Wheat flour mixed with water. The dough is rolled into the desired shape. Then the pasta into the dryer to remove excess moisture. Finally cooled and packaged.
1, The main raw material is wheat flour and egg products.
In the first stage of mass analysis by a laboratory. If the analysis obtained a positive result, it will be the raw material into the noodle factory. Flour is stored in silos, and then into production lines
2, Processing: flour mixed with water and other ingredients specified in the recipe. Fixed roll dough belt conveyed to the exhaust gas through the low pressure and the surface plane.
Remove the dough with a screw through the rolling surface machine to achieve the desired shape.
Then the pasta into the dryer, and gradually remove the moisture. Pasta is here to stay, until dried stable shape.
3, Weighing and Packing: Weighing in on each product packaging lines and complete the initial packaging (bags and boxes), then secondary packaging, that is packing.
Computer-controlled shuttle for the transport of containers.
Each box is wrapped in a nylon film, affix identification labels. 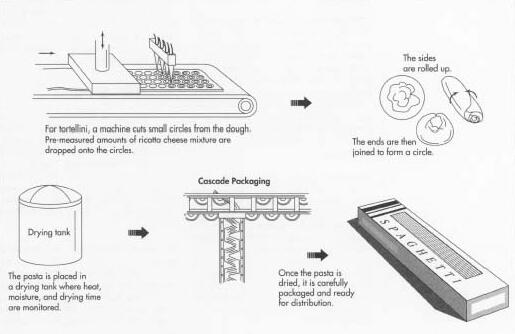 20s century, well-developed industry widely pasta exports become important highlights of the new century, around 1913, the export volume of pasta has reached 70,000 tons, which is the vast majority of them are imported from the United States. Subsequently, a large number of importers began to try locally produced pasta to reduce costs, then all kinds of original Italian pasta processing machines quickly conquered the world. In 1917, Fereol Sandragne registered the first continuous processing of pasta production line. At the same time the Soviet Communist Party uprising, cutting off the last long line of Russian transport quality wheat. So first start using pasta from France, the United States wheat manufacture. Today, most of the wheat production of pasta in Italy are locally produced and imported from the nearby Austrian came.
1933, on a real sense of "continuous," the automatic pasta machine is generated, it is when two engineers from Parma, Mario and Giuseppe Braibanti together by the design of.
Today, pasta has been accepted in many parts of the world, such as Europe, Australia, North America and South America. At the same time, a new pasta is called meticulous pasta spaghetti is also widespread, in addition to many other varieties are also very popular.