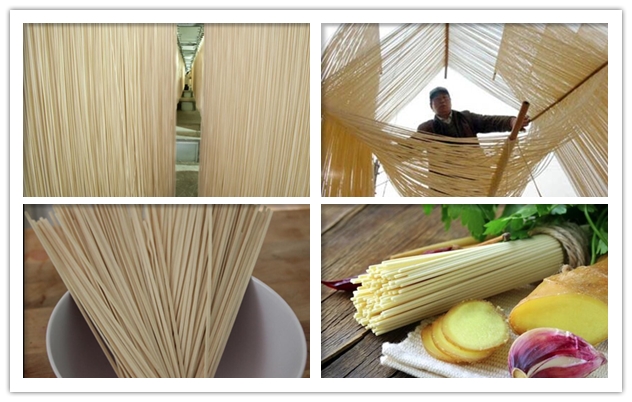 Stick noodles are made of wheat flour added salt, alkali,water and dried by hanging after cutting into a certain length of dry fine noodles.
In China, noodles has a long history. Tang Dynasty, Song noodles into real time "strip" in. Yuan Dynasty, the Ming Dynasty has been the advent of vermicelli. Noodle production began in the Yuan Dynasty, was mainly dry in the sun. Until the founding of New China, we are a large number of hand-made noodles, only a few mechanical production. After the founding of noodle industry, it has rapidly developed, the degree of mechanization noodle production lines increasing, indoor drying technology is more widespread promotion. Noodle development today, a wide variety of different production technology can be divided into two categories: one is based on China, Japan, represented by Oriental noodles, it is the result of multi-channel roll nip into the surface zone, using low-temperature or after slitting temperature drying moisture longer made. Full drying time is generally 4 to 8 hours; the other is in Italy as the representative of Western macaroni, is under high pressure with the extruder into strips and then the temperature or high-temperature drying is made. These two types of products have originated in China.
Noodle adding the right amount of salt and a base to Naizhu, cooked noodles Tang Qing, eating tasty; some also add some accessories to make it more nutritious and delicious. Since having eaten noodle, possession, custody convenient features, so welcomed by the masses. Past production of noodles are manual, later developed into a mechanical production.
The production process of Stick Noodles Making Plant
Dough mixing→ Curing→ Calendering→ Cutting → Drying → Measurement → Packaging → Testing → Finished noodles
1, Dough mixing  Flour, salt, head back to the machine and other surface materials according to the proportion of dosing; the amount of water should be based on wet gluten content of flour is determined, typically 25% to 32% dough moisture content of not less than 31%; water temperature should be controlled at about 30 ℃; and the face for 15 minutes should be long winter, summer is short. When the end surface and the dough was a little loose granular, can be hand into the group, and gently rub can recover loose and layered section. And surface equipment to a horizontal straight line with a stirrer and stirrer horizontal curves better. In recent years, foreign countries have emerged advanced vacuum and surface machine, but expensive.
2, Curing machine using disc or horizontal uniaxial cooker dough is aging, storage material and sub-material, time is generally 10 to 15 minutes required
Dough temperature, and moisture can not differ too much and the rear surface. Practice has proved that after the second dough composite curing, the effect is obvious, domestic and foreign manufacturers have adopted.
3, Calendering tablet ships with composite calender roll and reducers manner, the technical parameters are as follows:
Rolling Multiples: First Dough sheet thickness is usually not less than 4 to 5 mm, the addition of 8 to 10 mm thickness of the composite front end of pavement sheet of 1 mm or less, to ensure that the rolling multiples of 8 to 10 times, so that the dough sheet tight, bright and clean.
Roll linear speed: To ensure the quality and yield of noodles, the last wire-speed road roll of 30 to 35 m / min is appropriate.
Flaking number of tracks and rolling ratio: flaking number of tracks 6 to 7 as well, each track roller ideal rolling ratios were 50%, 40%, 30%, 25%, 15% and 10%.
Roll diameter: tableting method is reasonable diameter rolls, roll diameter of its arrangements for the complex phase, ∮240 mm, ∮240 mm, ∮300 mm; rolling stage, ∮240 mm, ∮180 mm, ∮150 mm, ∮ 120 mm, ∮90 mm.
4, Cutting machine cutting the molding is complete, the machining accuracy and the use of the knife mounting surface often burr knots, twisted and noodle appears and strip width and thickness inconsistencies and other defects. Knives have integral and modular, multi-shape is square, divided into the basic specifications 1.0,1.5,2.0,3.0,6.0 mm five. At present, China has developed a circular or oval-shaped knives, to solve the problem of a single bar. Below the surface with a knife cutting knife, the role of wet noodles lateral cut, the speed can be adjusted according to the length of each rod wet noodle.
5, Drying is the largest investment in the entire production line, the most technical processes, there is a very important relationship with the product quality and production costs. Crisp surface, tidal surface, acid and other surface phenomena arising in production, are due to drying equipment and technology caused by the irrational, and therefore must be a high priority.
Thank you for visiting our site! Please feel free to submit this form with any questions or comments. We will answer your message within 24 hours.
Scroll